David was born in 1959 in a suburb of London called Finchley soon to become famous for being Margaret Thatcher’s constituency.He developed his passion for performance from his experiences in the Military as a Member of the Modern Pentathlon School of Excellence, as the WA State Triathlon Coach, which lead to the largest medal haul in the State’s history at a National event. David’s Coach, Olympic Gold Medalist Jeremy Fox.

David’s father had a strong sense of military service and fought in Normandy with the Royal Sussex Regiment in the Second World War. Unfortunately, the injuries his father sustained in his military service contributed to his death when David was sixteen
This strong sense of military service inspired David to join the Army in 1978 as an Electrical and Mechanical Engineer. Having a passion for sport and having just seen one of the regiment’s officers win an Olympic Gold Medal at the Montreal Games, David decided to train as a Modern Pentathlete at the Great Britain School of Excellence.

As a member of the Modern Pentathlon School of Excellent He learnt.

David had always wanted to emigrate to Australia after reading the book The Chrysalids at school. At eleven he subscribed to two Australian newspapers, to keep up to date with the goings on in the “Lucky Country”. With his love of multi sports and need for independence he emigrated to Australia and established a Triathlon Club. David used the techniques he learnt in the Army and his Triathlon Club won “The President’s Cup” and became the best club in the State. David became the Western Australian State Junior coach for Triathlon in 1992.

(There wasn’t a senior coach’s position for Triathlon in 1992). 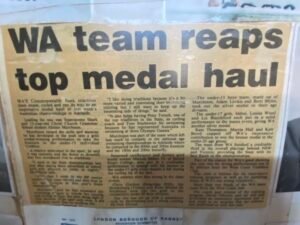 As the State coach he learnt and improved my knowledge in:

David decided to move from elite sport and took a position with Curtin University in Kalgoorlie, Western Australia. David worked across the tertiary and the vocational sectors as the team leader delivering commercial training in occupational health and safety and management. He lived in Kalgoorlie for eight years. During this time, He worked full time, undertook postgraduate studies, and continued with my love of sport. One of his greatest achievements during this period was to run non – stop 120 km pushing a wheelbarrow of Iron Ore from the Whims Creek Hotel to Port Hedland.

As University lecturer in Kalgoorlie He learnt:

After eight years as a Curtin University lecturer He decided that even though He work with primary industry, He wanted to experience working in primary industry, and so He took a position as a mine site coordinator a Granny Smith mine in Laverton.

As a fly in fly out training coordinator He learnt:

“You have opened up so many people’s minds in different ways…whether it was to open someone’s mind to new ideas,

offer them a book to read or introduce them to another way of learning.”

The first year was very challenging as all business owners find out, in addition to trying to build a business he walked out of the surf on 26/01/06 having broken two vertebrae in his back. Additionally, David had to have a Tubercle Tibial Transfer and a Maci graft on his right knee to replace the cartilage he had worn out from years of running.

As a business owner the lessons he is continuing to learn: